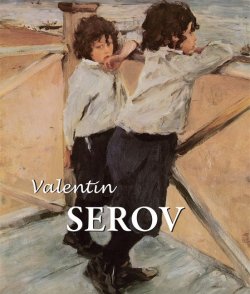 
Among the “young peredvizhniki” who joined the World of Art group, the most brilliant portraitist was Valentin Serov. Like many of his contemporaries, he delighted in painting out of doors, and some of his most appealing portraits – such as Girl with Peaches, Girl in Sunlight and In Summer – owe their naturalness to their setting or to the interplay of sunlight and shadows. Indeed, Serov regarded them as “studies” rather than portraits, giving them descriptive titles that omitted the sitter\&#39;s name. The subject of Girl with Peaches – painted when Serov was only twenty-two – was in fact Mamontov\&#39;s daughter Vera. The model for In Summer was Serov\&#39;s wife. When only six years old, Serov began to display signs of artistic talent. At nine years old, Repin acted as his teacher and mentor, giving him lessons in his studio in Paris, then let Serov work with him in Moscow, almost like an apprentice. Eventually Repin sent him to study with Pavel Chistiakov – the teacher of many of the World of Art painters, including Nesterov and Vrubel. Chistiakov was to become a close friend. Because Serov\&#39;s career spanned such a long period, his style and subject matter vary considerably, ranging from voluptuous society portraits (the later ones notable for their grand style and sumptuous dresses) to sensitive studies of children. Utterly different from any of these is the famous nude study of the dancer Ida Rubinstein, in tempera and charcoal on canvas, which he painted towards the end of his life. Although Serov\&#39;s early style has much in common with the French Impressionists, he did not become acquainted with their work until after he had painted pictures such as Girl with Peaches.